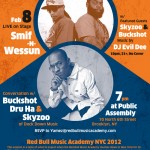 More on Red Bull Music Academy:
From September 30 through November 2, the city will play host to a five-week-long festival featuring unique concerts, club nights and workshops in some of the most iconic venues around town. Meanwhile, 60 inspiring music makers from all around the world will come together to attend exclusive lecture sessions and collaborate in ten studios set up for the occasion.