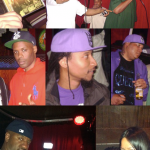 Large Pro and Neek The Exotic had their Release Party for “Still on The Hustle” this week.  Both these men are childhood friends and the album tells the story of their lives including Neek’s time as a youth hustler, a felon and now a man whose self-described “thoughts are like Conan” on this mission to succeed.  Salute Michele for putting the event together! She had Big Jeff hosting.

The fans showed up at Tammany Hall early.  I strolled through the crowd talking to all the people only to find that many of them flew in all the way from Australia and Germany.  I marveled at their dedication.

It was also good to see some of my favorite NY people supporting this new release.While Neek and Large brought that high energy and easy chemistry onstage, Cormega  did his thing showing love to the fans and dropping some lyrical gems (all while decked out in Polo and one of Damon’s COA caps).

General Steele came through with his Brooklyn team.  That was a nice surprise considering he just teamed up with Cormega, Redman, Maya Azucena and Fame M.O.P. on a charity song for Haiti. ( Click here to see the MTV article on how the Haiti song came together or check out some of the MTV audio interview below).  That song for Haiti is out on itunes now so it’s 99 cents well spent.

Craig G participated in a round of Jameson for which we forgot to add ginger ale.  As far as I saw- the results  did not adversely affect those legendary freestyle skills which he put on display later that night!  Oh.. Craig G and Steele didn’t tell the rest of us to wear purple. Guess it was a BQE thing.  We can’t all be as cool as them.

OG was in the house with Lord Finesse (artist/super-producer/ DJ) on the set controlling the music all night.  Finesse is that no-drama, Diggin In The Crates capo who DJs with a keen eye on the crowd’s reaction, so the music vibe was perfect.

I know I mentioned there were Hip-Hop heads who came from all over the world to support Large and Neek.  The girls from Australia were particularly bubbly!  But let’s be clear: NY was in the house.   Blazin Eurasian (Raven) took in the show from a vantage point near the stage.  Her photographer was also on hand. I look forward to seeing more fun pics of this night from her.

The night ended with a large cipher in the crowd.. including Cappadonna of Wu-Tang, Mr. Cheeks of LB Fam, Royal Flush, Lord Finesse and more.

I’ve been to reggae shows that end in the same kind of ciphers.  Of course the accents are a little different ;o)  but the principle is the same.  It’s only done by passionate people whose talent allows them to flow unexpectedly.  It’s an exhilarating thing when you see it in person.  Especially when people like Lord Finesse join in to drop lines like –

You betta approach me in a order that’s a cool/ I’ll make ya career shorter/ than paula abdul/ I’m such a nightmare/ even if I fight fair/ you bout to come back wit the cops like: / “Officer.. right there..”

Love and respect to the fans, friends and architects of the culture who came from all over the world in support of Neek The Exotic and Large Professor, “Still On The Hustle!”

The album Still On The Hustle, (Neek The Exotic, featuring Joell Ortiz, Satchel Page plus production by Marco Polo, Lord Finesse and Large Professor), is available for purchase on iTunes now.  It’s also on Compact Disc ($9.99) or on Vinyl ($15.99).  To preview tracks from the album, head on over to FatBeats.com.