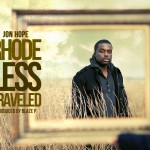 Jon Hope has revealed “Rhode Less Traveled” as the first leak from his May 9th LP “Work In Progress.” Produced by Blaze P, the triumphant anthem sets the tone for his hotly anticipated, and long awaited album.

The track, Hope announced, is also being featured in Nike’s international “The Chance” social media campaign which invites soccer players around the world to create highlight reels set to “Rhode Less Traveled” for a chance to train with the world’s most elite teams.

Jon Hope said of the collaboration “I’m honored to be chosen for this campaign, as a former college athlete I’m excited to see how the players incorporate the track into their videos.”

More information on Nike’s “The Chance” can be found at http://www.Facebook.com/NikeFootball