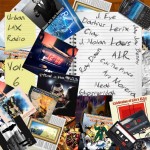 Woke up today and was happily greeted with the release of 2 new projects I played a little role in. Up top, we have Signif (super dope artist, female emcee) putting out here Embracing Rejection mixtape. We did a song together called “The Rebuttal,” it’s track number 8 on there. Very dope. And then one of the few people involved in the music industry that I know & respect, ms Fawn Nicole, put together a mixtape called UrbanLax Radio, vol. 6. It’s comprised of a bunch of talented artists such as CyHi The Prynce, Laws, GhostWridah, Neak…and J.NOLAN. Had to hype myself up for a sec. lol But yeah, there’s more people featured on the tape as well. My song is called “Cloud of Sunshine,” it’s track 12.