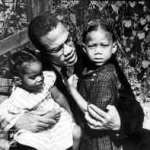 Join The Schomburg Center in Harlem as we celebrate Malcolm’s X birthday. Brought to you by the Malcolm X Museum//