Can seeing faces that resemble yours in art function as a form of self care? Can committing to take a group of girls to the museum be a form of self care for you (and them)? ChevonMedia and Soulful Sips set out to answer these questions and were delighted by the art, and the girls earnest reactions to each Kehinde Wiley piece. At the end of the video, tell me if you catch the moment where one little girl seems to realize that she, like the women in a painting, will need to team up with other black women for protection in this world. Watch her eyes.

The Surdna Foundation works to foster just and sustainable communities in the United States. The 2015 Artists Engaging in Social Change program will accept online applications between Monday, September 15, 2014 and Wednesday, November 12, 2014 at 11:59 p.m. (EST). Please note that applications will only be accepted via the online process. Through this RFP, Surdna will support compelling projects that artists develop in response to their communities’ specific challenges, and will also fund the projects of artists whose long-term, deeply-rooted work has increased social engagement without necessarily being explicitly defined as “activist.”

Successful applicants will receive grants ranging from $25,000 to $150,000 over one or two year periods, with a maximum total award of $150,000.  The Request for Proposals is on the Surdna Foundation website: http://www.surdna.org/rfp 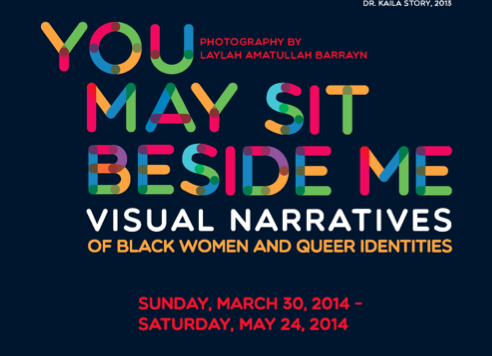 You May Sit Beside Me: Visual Narratives of Black Women and Queer Identities, is an exhibition of intimate photographs accompanied by spirited conversations that explore the complexities of living as queer Black women.

Stacey Muhammad is an award winning filmmaker and director. Her work includes the award winning “I AM SEAN BELL, black boys speak”, which was an official award winner at the HBO/Media that Matters Film Festival.  For Colored Boys is a series of short stories that follow the lives of African American men from various walks of life as they navigate and overcome challenges, face their fears and find their truth.

The show is produced in part by Cynical Smith, with music direction by General Steele and an acting debut made by Tekomin of Smif-n-Wessun.

The first season of For Colored Boys, subtitled REDEMPTION, follows the life of Benjamin Boyd, Sr. who upon release from prison seeks to reunite his family by rekindling his relationship with wife, “Lisa” and reassuming his role as father to his teenage daughter, Sidney and 20 year old son, “E”. A talented yet somewhat troubled young man, “E” has had to shoulder a tremendous amount of responsibility during his father’s incarceration.

Synopsis: Accustomed to assisting his mother with his 15-year-old sister, Sidney, he is pulled and persuaded by the temptations of his environment to make money and help provide for his family.  Returning home, Benjamin finds his son is no longer a boy, but a man unwilling to acknowledge or accept the presence of his father.  In order to mend a troubled and fragile relationship and rebuild his family, Benjamin must be careful not to overstep his bounds, yet still re-establish his presence as E’s father.  Finding his place in a world he’s been estranged from is more difficult task than he could have ever imaged and suffering from Post Incarceration Syndrome makes it seem nearly impossible.

Reggae legend Jimmy Cliff stars as Ivan Martin, an aspiring young singer who leaves his rural village for the capital city of Kingston, Jamaica hoping to make a name for himself.

Robbed of his money and possessions his first day in town, he finds work with a self-righteous, bullying preacher and an unscrupulous music mogul who exploits naive hopefuls.

In desperation the simple country boy turns outlaw, at war with both the police and his rivals in the ganja trade. Ivan’s dream of stardom soon becomes a reality as he rises to the top of the pop charts and the most-wanted lists.

This gritty, groundbreaking film brought reggae music to the international stage, made Jimmy Cliff a star worldwide, and demonstrated that music and art can change the world.

I could not talk about this before the official announcement, but now I can!  On Friday, August 16, 2013, Spike Lee will be joined by DJs Clark Kent, Scratch, Spinna, and more for an all night dance party and fundraiser.

The party, sponsored by Brooklyn Bowl and 40 Acres and a Mule, will start at 11:45 PM at 61 Wythe Avenue, Brooklyn, NY 11249.  Money and awareness raised will go toward Spike’s new film.

I love the Saul Bass influenced poster!  Get excited about this party and visit BrooklynBowl.com for tickets!