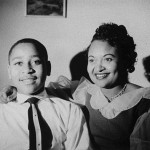 Till and his mother.

Bryant, Milam, and their wives celebrate the two mens’ acquittal. 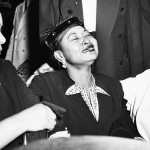 The appalling, brutal murder of Emmett Till, a young African-American boy from Chicago, was one of the key events that helped spur the African-American Civil Rights Movement of the 1950s and 60s. Between 1882 and 1968, nearly 600 lynchings (of both blacks and whites) had, according to the Tuskegee Institute, taken place in the state of Mississippi. It was Mississippi that Emmett Till visited in the summer of 1955 to stay with his relatives.

What exactly transpired that provoked his murder remains uncertain: according to some, Till whistled at a white woman working in a store; according to the woman herself, Till made advances on her using “unprintable” words. He may, in fact, have had a stutter that caused him to make whistling noises while speaking. Whatever the case, it was after this incident that Till was taken from his great-uncle’s home by three men at around 2:00 in the morning and brutally beaten. One of the perpetrators was Roy Bryant, husband of the white woman at whom Emmett Till had allegedly whistled; the other was his half brother J.W. Milam. According to a 1956 interview, the men had not intended to kill Till but merely beat and frighten him. How did an attempt to scare a teenage boy turn into murder? An excerpt from that interview:

I [J.W. Milam] tood there in that shed and listened to that nigger throw that poison at me, and I just made up my mind. ‘Chicago boy,’ I said, ‘I’m tired of ‘em sending your kind down here to stir up trouble. Goddam you, I’m going to make an example of you—just so everybody can know how me and my folks stand.’

Bryant and Milam shot Till by the Tallahatchie River and dumped his body, weighed down with a 35-kg fan from a cotton gin. When Till was discovered in the river three days later, his corpse was unrecognizably disfigured, decomposing and swollen. While the lynching of blacks in the South was rarely covered widely by the media, reaction to the murder of Emmett Till was widespread – and local Mississippian newspapers, along with the state’s governor, outright condemned the murder and murderers. Till’s mother, meanwhile, demanded that her son’s body be displayed in an open-casket funeral, which it was. However, the public’s opinion soon turned more sympathetic towards the murderers, who were both shockingly acquitted of the crime after a little over an hour’s deliberation by the jurors, one of whom joked that if the jury had not taken a break to drink soda, they would have come to a decision even sooner.

In 1956, Bryant and Milam unrepentantly confessed to and described the killing of Emmett Till in a magazine interview.