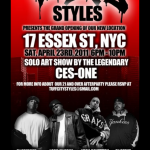 Tuff City is opening a new shop in Manhattan on Sat April 23rd. In following in their Bronx store’s footsteps it is a Subway themed shop and also features a half a life size subway train in the backyard.

The opening will also have a Ces One solo art show that will feature never before publicly shown works.

The official after party will feature world famous DJ Premier as well as Lord Finesse, Vega Benetton and DJ Serve. The after party is an invite only event and the only way to get in is with the official Tuff City Metro card. To get your Metro Card for entrance… RSVP for the event at tuffcitystyles@gmail.com