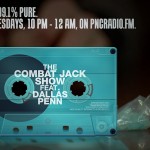 dream hampton on the combat jack show with dallas penn

The Combat Jack Show feat. Dallas is weekly online radio show comprised of a diverse array of personalities with an overall love and appreciation for hip hop culture, fashion, music, and current events. The show is helmed by Combat Jack and his co-host Dallas Penn, whose personalities add for an always entertaining show experience for the guests and listeners. With over 70 plus shows, thousands of downloads and online views this is only the beginning. “It don’t ever stop” #Newmanati